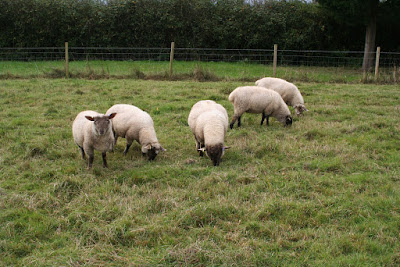 Taking some time outside just to have a look at what’s going on out there on the plot. Lambs are growing well. Is it my imagination or does Brownie always look up when I lean on the gate? 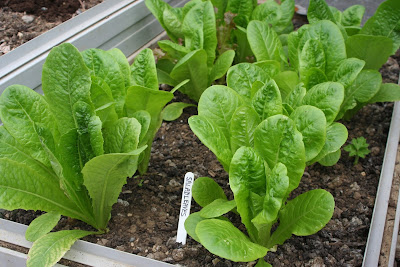 Meantime in the polytunnel it’s lovely to see new crops growing and the bright green of these Cos lettuces have perked up an overcast morning. These were sown at the end of September but it’s not too late to sow winter leaves in the polytunnel or the greenhouse – seeds can be sown under cover at least a month after the last sowing date on the packet. Look for the packets that say "ready in 3-4 weeks" and try some mixed oriental leaves available from most of seed suppliers. These generally include Mustard, Mizuna and Rocket and have a lovely peppery taste. Don’t cut the whole plant but pick the leaves individually from January onwards (they take around 3-4 weeks) and you might get 2 or 3 pickings from each. Combine them with Cos or Little Gem lettuce leaves and eat with cheeses and pickles for lunch or wilt them down in a little butter as a hot veg with boiled spuds. Delicious!

Learnings & Tips:
*Don’t forget to sow winter crops in late Autumn in the Polytunnel: Salad leaves, oriental hot leaves, spring onions amongst others
*Polytunnel sowings can be done 4-6 weeks after the last sowing date on the packet at the end of the season, and 4-6 weeks earlier than the first sowing date at the beginning of the season.
Posted by Julie Norman 1 comment:

A Little About Me

Chicken keeper, lamb and piglet raiser, vegetable plotter and gardener, greenhouse and polytunnel enthusiast. That’s outdoors... Indoors I’m the boss of HenSafe – the unique automatic chicken coop door opener. www.HenSafe.net. Oh and I also sketch and paint, knit and crochet, cook and craft in my "spare time. I sell under the JKStudio brand website and through other local channels. My Canon camera is my constant companion when I’m out and about and I love to capture landscape and abstract images, always looking for a different perspective.
Thanks for checking in - hope you enjoy reading my blog, and don’t forget to leave me a comment :)
Julie Norman